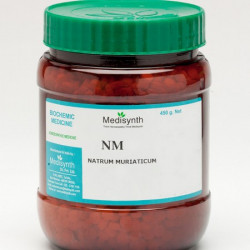 Free Express Shipping for order USD 75 and Above .

Product Image are shown for illustration purpose only.

It corresponds to complaints that are slow, that are long action.

For oily hair and a greasy skin with blackheads and acne, Natrum Muriaticum works good.

The Natrum Mur patient is extremely emotional and has increased thirst, and often an excessive hunger, which is satisfied after only a few mouthfuls.

Voracious appetite, keeps on eating much, but all the time emaciating, there is wasting of the upper parts of the body.

The characteristic discharge from the mucous membranes is watery or thick whitish, like the white of an egg in Natrum Muriaticum.

Hammering pains in the head on waking in the morning, for periodical headaches Natrum Muriaticum is the best remedy.

Aching along the spine, Coughing aggravates the pain and is relieved by lying on something hard, or pressing the back up against something hard indicates Natrum Mur.

Jerking of the muscles, trembling of the limbs, inability to keep the limbs still is effectively recovered with help of Natrum Muriaticum

Natrum Muriaticum is useful in the complaints of women, in troublesome menstruation.